Date: 24/11/2018 By Check In Creta Categories: The food The island of Crete No comments

Crete is a botanical paradise. This is no coincidence, but can be rather attributed to its long history and the richness of its landscape.

On the one hand, we find large clusters of Alpine mountains, steep slopes, plateaus and forests; on the other hand there are beaches and seaside fertile plains, extensive olive groves and Mediterranean scrubs. The variety of ecosystems ensures the rich flora. 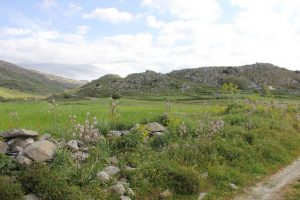 The isolation of the island has helped to the development of certain species which are only found here and nowhere else in the world. These are the so-called endemic species. In the phytogeographical region of Crete (including Karpathos and Kasoy, due to the many similarities in flora) there has been recorded a total of 2,093 plant species, belonging to 705 genera (Demopoulos et al. 2013). This is a large number, close to the number of species in some major European countries, such as Poland. Even more impressive is the number of endemic species: in Crete and the wider area there are 362 endemic species and 122 endemic subspecies. Crete, therefore, along with Peloponnese, is one of the richest areas of Europe in endemic species. Some of these plants are quite frequent, such as Petromarula pinnata, but many others are extremely rare and require immediate protection. Cretan tulip (Tulipacretica), several species of Orchids, Cretan cyclamen (Cyclamen creticum) or Ebenuscreticus are only a few of the known endemic plants of Crete. On the island there are also some endemic tree species, like ampelitsia (Zelkova abelicea), which exists in scattered sites in Cretan mountains. Some other plants, such as famous Phoenix Theophrastos (Phoenix theophrastii) are almost endemic, growing in very few places outside Crete. With this highly endemic flora comes great responsibility: we have to preserve all these rare species, so that future generations will be able to see them in Crete. Only the Cretan people can significantly help to ensure this.

In addition to the endemic plants, there are many other species of regional significance. Plants, aromatics, bees … Many of them are found in the Mediterranean area, in  macchia  and bushy areas. Alifaskia (Salvia fruticosa), endemic erontas , also known as dictamnus (Origanum dictamnus), malotira (Sideritis syriaca), wild lavender (Lavandulas toechas) or Cretan ladanies (Cistuscreticus) are some of the most well-known species, which have found various uses in human activities for centuries. The contemporary interest shown by the tourist industry for wild herbs makes the cultivation of these plants imperative, so that they will not disappear from their natural sites.

The rich, internationally unique flora of Crete attracts more and more nature lovers from all over the world. No eyebrows should be raised when you see Greek and foreign botanists exploring mountain slopes, plateaus, olive groves or the coasts of the island. “Botanical tourism” is a quite common phenomenon, which proves the uniqueness of the Cretan flora, as well as the need to preserve this wealth.